Downtown Winston-Salem By the Numbers

Growing up in Winston-Salem, my family and I rarely came downtown. Downtown was a 9-5 place, full of office buildings and not much else. For those that worked downtown, it was understood that as soon as soon as you left work, you got out of downtown quickly. As I have begun talking to others about their experiences, I can’t tell you how many people have expressed to me their perception that downtown, especially Trade Street, was always a “scary” place to be.

This perception makes the changes and growth of downtown Winston-Salem in the past decade all the more exciting. The evolution we have the privilege of witnessing is the result of a tight knit, hard-working community that believes in Winston-Salem’s potential and has committed to seeing that potential fulfilled.

The success of downtown that started from local investors and developers coming together to “buy in” on downtown has snowballed into national developers seeing Winston as place they need to be. The revitalization of downtown Winston-Salem has seen big changes since 2000 and even bigger upward momentum in the past two years.

A recent study found that between 2000 and 2014, over $1.2 billion was invested in downtown Winston-Salem. In the past two years, the total investment has gone up a staggering 21%.

This study, which was unveiled in February at the Downtown Winston-Salem Partnership’s annual meeting, breaks out the investments from 2000 to 2016 into 8 categories: residential, institutional/public, health & technology, commercial, office, arts & entertainment, multi-use, and infrastructure (see below for each category’s total). These investments have allowed the city to champion some major projects that have moved the needle on the growth scale. 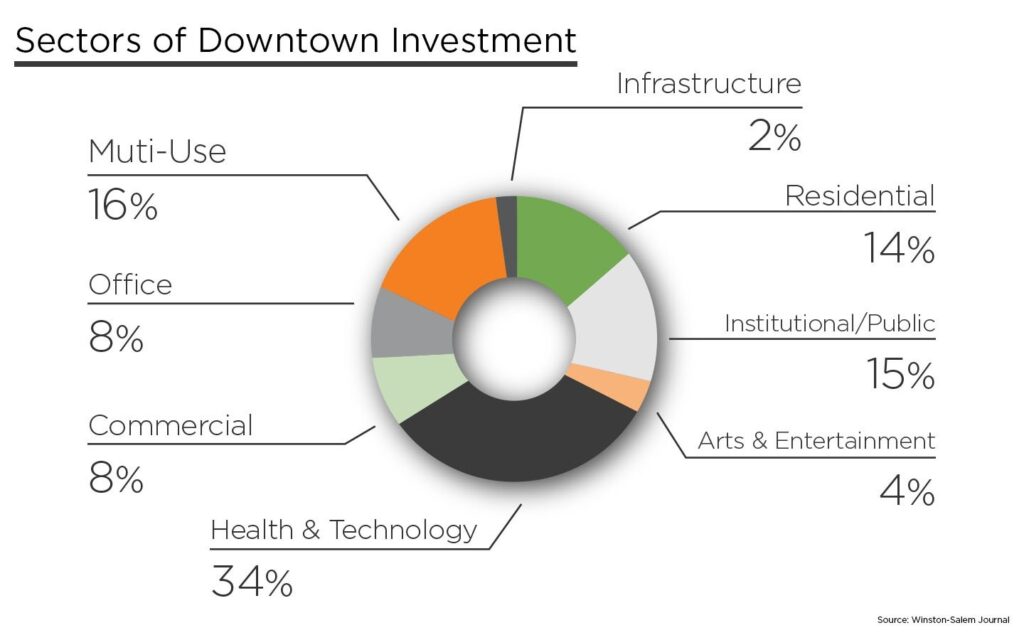 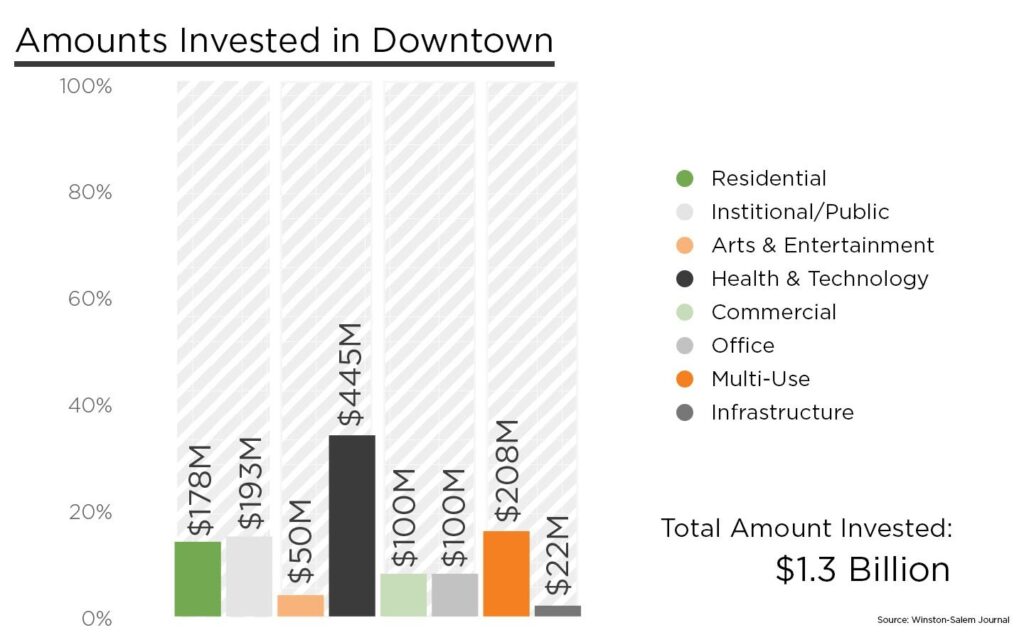 Several of these projects include (but certainly are not limited to):

Outside of these projects, one of the biggest changing sectors downtown has seen is in residential growth.  A statistic that jumped out to me from the aforementioned study was that from 2009 to 2014, only 1,000 residential units were built downtown, yet today we have 3,058 units with an additional 1,000+ apartment units planned. Across the country we have seen that multi-family growth of this nature has substantial growth effects on commercial development. With residential growth comes more retail shops, restaurants, and bars to cater to all of the surrounding downtown residents. We have already seen this trend playing out here with the influx of bars and restaurants like Crafted the Art of Taco, Wise Man Brewery, and

Downtown Winston-Salem’s explosive growth certainly doesn’t seem to be slowing down. With all of the momentum and planned projects, I expect to see the growth continue for years to come.