AirBnB: Not as Grim as It May Seem for The Hotel industry

Would you stay in a stranger’s home? More and more, people are answering: “Yes, but not for business travel.”Since its inception in 2008, Airbnb has grown to become the largest home sharing network with over three million listings worldwide. In doing so, Airbnb has rapidly become a threat to the hotel market as travelers choose to book with independent hosts on the website rather than with traditional hotels (similar to the impact Amazon has had on the retail market). While every hotelier is aware of the general threat and competition that is Airbnb, what is the quantifiable impact the vacation rental site actually has on the industry as a whole? A look at the empirical data provides us with an interesting perspective on the far-reaching impact of the peer-to-peer site.

Recently, two reports provided analytical data showing that the large hoteliers simply cannot dismiss the threat of Airbnb, albeit the degree of concern varies somewhat between the two findings.  The first report from Morgan Stanley titled “Who Will Airbnb Hurt More — Hotels or OTAs? … One Year Later,” used survey data collected from more than 4,000 consumers in the U.S., UK, France, and Germany to demonstrate, among other things, the competitive threat of Airbnb to hotels and online travel agencies (OTAs). Using data from 2015-2016, Morgan Stanley notes a significant increase in the number of travelers who have used Airbnb in the last 12 months. In 2015, only 12% of leisure and business travelers surveyed had used the site. In 2016 that number rose to 19% for leisure travelers and 18% for business. Both numbers are predicted to rise in 2017, with 19% of leisure travelers booking through Airbnb and 18% of business travelers (see Figures 1 & 2 below). According to Morgan Stanley, “Airbnb usage has increased more than we thought it would and cannibalization of traditional hotels has also been higher.” (When reviewing these findings it should be noted that Morgan Stanley is an investor in Airbnb and therefore has a financial stake in the success of the privately owned company.) 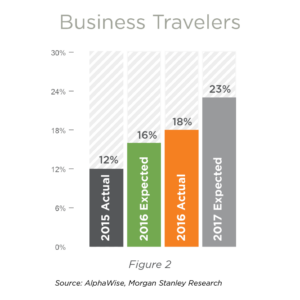 The second report is from STR, a hotel industry research firm, which looks at Airbnb-supplied data in 13 global markets from December 1, 2013 to July 31, 2016, and uses that data to examine the performance of both hotels and Airbnb. The markets reviewed in the report were all large markets and included Barcelona, Boston, London, Los Angeles, Mexico City, Miami, New Orleans, Paris, San Francisco, Seattle, Sydney, Tokyo, and Washington, D.C. While acknowledging that the threat of Airbnb is here to stay, the STR report does not suggest the same adverse impact on hotels as the Morgan Stanley report. The STR report makes a number of “compelling findings,” including among other things: (i) that average hotel occupancy was still higher than that of Airbnb, (ii) Airbnb’s share of total accommodation supply was growing but Airbnb’s share of market demand and revenue was still below 4% and 3% respectively and (iii) Airbnb’s share of business travel was substantially smaller than its share of leisure travel.

Reflexive Changes in the Industry

While the growth of Airbnb is unlikely to ever topple the hotel industry, its effects can be seen in changes to the hospitality industry. Hotels are striving to become more of a part of the local community, with an emphasis on residential design and more intimate and non-manufactured experience for the guest. Larger hotel companies are expanding their portfolios to include brands that are designed to appeal to the millennial traveler with technological advances, shared spaces and more connectivity to the surrounding community. As an example, think about Kimpton’s Cardinal Hotel right here in downtown Winston-Salem. They have opened the hotel in a historic, quintessential Winston-Salem building and have tailored the whole design and experience to emphasize the community of which they are a part. It is this kind of differentiator that seems to be key for hotels to stand out for millennial travelers.

Additionally Airbnb may serve to keep hotel pricing down, especially during compression times, when city-wide events take place. The availability of Airbnb rooms lessens demand compression and therefore keeps hotels from introducing large increases in room rates. While Airbnb will continue to impact hotel changes, the fact remains that the business traveler is the main driver for the hotel industry. 70% of room nights in the U.S. lodging industry are generated by business travel and while Airbnb is growing in use among leisure travelers, it remains to be seen if it can make a significant dent in the business travel market. According to Laura Paugh, Marriott International’s SVP of Investor Relations, “We’ve not seen it really making headway in the corporate environment, which is really our bread-and-butter business.” Therefore the real threat of Airbnb to hotels will hinge on the company’s success in converting business travelers into regular Airbnb users, which will likely prove to be a difficult task.